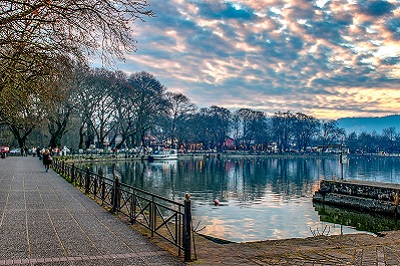 First time to Ioannina? The sights you must visit!

Ioannina, a lively, modern city, idyllic built by the lake, and many traditional villages within walking distance – I’m talking about Zagorochoria-, Metsovo, one of the most rustic mountain settlements – with a huge tradition in 35 ΄, and the wild beauty Tzoumerka that stand out in the next best thing! And all this one step from the most popular summer destinations of the Ionian, Parga and Sivota. However, here, we will focus on the sights that you should definitely visit on your next trip to Ioannina!

Lake Pamvotida, the most famous attraction of the city. The history of the lake (area 22.8 sq.km.), the second oldest in Europe, begins 3,500 years ago. century, when the Despotate of Epirus was founded and a total of 6 monasteries were built, making it the stronghold of Byzantine monastic life.

Its decline and desolation came when Ali Pasha, encroached on the property of the monasteries and imposed heavy taxes on the inhabitants. With the fall of Ali, the inhabitants returned and until today Pamvotida together with its island is considered the jewel of the city!

It is one of the two inhabited lake islands of Greece and the only one in the world without a name! To get there, board the boat that departs from Molos to Ioannina and in just 6 minutes you will find yourself in a world that seems to have been forgotten by time. Shops with local products, but also taverns that serve lake fish compose its scenery!

– the excellent museum of Ali Pasha (Admission € 3, T. 26510 81791, museumalipasha.gr)
– its 7 Byzantine and post-Byzantine monasteries that form a monastic state for centuries, the third largest in Greece, after Mount Athos and Meteora. Especially the monastery of Philanthropin, where the fresco of the 7 sages of Ancient Greece stands out, a rare phenomenon for a Christian church.
– the Fishermen square for ouzo.

The Clock, is the attraction of Ioannina has been characterized as a historical monument, since Greek patriots were hung on it on February 15, 1913 by the Turks, while here on February 21, 1944 the blue and white flag was erected by Members of EPON. Its perforated turret – a mixture of neoclassical and oriental style – attracts interest as it was commissioned by Osman Pasha of Kurdistan (general manager of Epirus & Albania).

It stands arrogantly in a peaceful location by the lake, near the village of Longades (8 km from Ioannina). According to legend, it was built by Durahan Pasha of Thessaly, who when he arrived in 1434 with his army that night did not cross the frozen lake, which was attributed to a miracle. Today you will meet Papa-Thanasis who offers a wonderful work hosting dozens of orphaned children. (T. 26510 52247)

Apart from being the capital of Epirus, Ioannina is also the “capital” of Romanesque Judaism, that is, the center of the Greek-speaking Jewish world. Since then, the Jews have been living in Ioannina continuously, maintaining special customs and traditions. Several old Jewish houses are preserved today as architectural heritage sites, such as the two houses of Levi, the houses of Mord Raphael and Moses.

The “Ancient Holy Synagogue of Ioannina”, built in 1826 inside the Castle, is one of the largest and oldest buildings! It is no coincidence that the wider area is a pole of attraction for the Israelis, who, especially with the direct flights from Tel Aviv, their attendance will be even greater! (16 Ioustinianou, Kastro, Tour by arrangement, T. 26510 25195)

It has been operating for a year now, inside the castle of Ioannina and specifically in the western bastion of the southeastern acropolis. The long tradition of silversmithing in Ioannina is revealed to visitors through audiovisual interactive routes that introduce them to the stages of each technique and decoration, until the final result. Among the exhibits are many elegant works from the 18th to the 20th century.

A unique museum of wax figures in Greece, located since 1995 in Bizani, just 12 km from the center of Ioannina. Passing the door of the mansion of continental architecture leads us on a journey with a time machine back in history through faithful representations of 150 life-size works of art, creations of the late Pavlos Vrellis. The “experiential” tour concerns three separate thematic units: the pre-revolutionary, the revolutionary and the special tributes, while shortly before returning to today, we “drill” mentally in the creator’s workshop!

One of the most famous caves in Greece, just 5 km from Ioannina, was discovered by chance in 1940! A limestone basement of 14,800 sq.m. (the tourist route is 1,100µ.) which consists of many consecutive rooms and corridors adorned with over 19 species of stalactites, stalagmites, and “curtains” and other speleological finds, which all together look like an open-air sculpture museum! More than 1,500,000 years passed before it reached its current geological form.
Tip: In 1956 fossilized teeth and bones of the cave bear were found.

10. The Castle of Ioannina

A reference point for Ioannina, the Castle (built in 528 BC) is a small living city in the city that the past, tradition and legend have been filled with stories, many of which are written in black. It was an economic, political and educational center, which has been mentioned since the years of Justinian.

Explore its narrow cobbled streets, gaze at the view of Lake Pamvotida from its two citadels and let it “unfold” both the history and the daily life of the “Kastrins”, as its inhabitants are called.

Entrances: Apart from the main one on Averoff, there is an entrance to the lakeside, but also from Molos while there are also 2 secondary gates.

What to see in the Castle of Ioannina:

The Museum of Silversmithing
At the NW Acropolis, the Municipal Ethnographic Museum (entrance € 2, daily 08: 30-16: 30).
On the NE Acropolis is the mosque of Aslan Pasha of 1618, and the mausoleum, where it is believed that the body of Aslan Pasha I was placed.
The underground prisons of Ali, on the NE Acropolis
The Byzantine Museum at Its Kale, on the SE Acropolis (entrance € 3, daily, except Monday 08: 00-17: 00).
The Fethiye Mosque with its ornate minaret, on the NW side of which the family tomb of Ali Pasha is preserved.
The Boeomund tower which was built in 1082 within the framework of the Byzantine fortification.