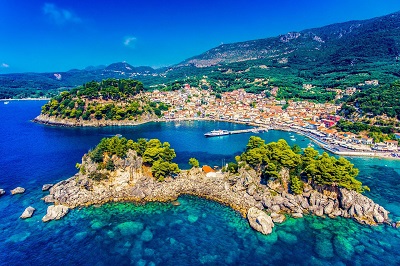 The island of Panagia, the narrow cobbled alleys that go up to the hill with the castle, the traditional “cantonments“, the elegant two-storey and three-storey houses with wooden balconies and the tiled roofs according to the local folk architecture, the mythical river and the Necromancer from the time of Homer compose the idyllic landscape of Parga.

Parga is an exceptional traditional settlement built amphitheatrically of rare beauty. It is one of the most popular places for summer vacations due to the beautiful beaches. Nearby are the beaches Kryoneri, Piso Kryoneri (within the settlement of Parga), Valtos and Sarakiniko in the west, Lichnos and Ai Giannakis in the east.

Just opposite the city there is the picturesque Island of Panagia on which a church is built as well as medieval and Venetian buildings. It is a popular tourist destination of Epirus.

Parga itself can be considered an attraction, its beach is quite picturesque and it is worth walking in its cobbled alleys. During the summer months it is connected daily by ferry connection with Paxos and Antipaxos. It is also connected by boats with Ammoudia, Corfu and Lefkada.

One of the most picturesque and cosmopolitan places of northwestern Greece, the beautiful Parga invites you to get to know its long history, its various natural beauties and the hospitality of its inhabitants. It is built on the outskirts of the Venetian castle and is clearly influenced by Ionian architecture.

The Castle of Parga: Before the construction of the mighty castle of Parga that survives to this day, the inhabitants of Parga tried to keep the fortified city, which was exposed to the sea, so that they could face the invaders. In this effort they had built the first fortifications with the help of the Normans. In 1452 Hatzi Bey occupied the fortified position but in 1454 it was recaptured by its inhabitants. Jaredin Barbarossa in 1537 demolished the existing fortress and city.
The castle was rebuilt with the help of the Venetians, but before it was completed it was demolished again by the Turks. The Venetians in 1792 built for the third and last time a perfectly strong fortress, which remained invincible until 1819, despite the attacks mainly of Ali Pasha of Ioannina who besieged them high above the castle of Agia – Anthousa.

The visitor there gets a very good picture of the fortification and realizes the perfection of the defense plan created by the Venetians. Vaulted corridors, supply galleries, artillery, strong bastions with gun boxes, a secret passage to the sea, barracks, prisons, warehouses and two forts on the last line of defense show a thorough defense study that together with the natural fortification made it invincible.

The castle of Parga, where one can reach through narrow streets and stairs from the port of Parga, and there is a paved road that leads to the beach of Valtos. Today the castle is illuminated and the public has the opportunity to visit it. In the central area, two main buildings have been reconstructed that host theatrical performances, exhibitions as well as crowds. In the Castle there is a refreshment-cafe, an exhibition space where a photo exhibition is housed. The castle can be visited from early in the morning until late at night.

Anthousa Castle: An imposing fortress built on a hill, between Anthousa and Agia and offers panoramic views of the entire area of ​​Parga. The fortress was built by Ali Pasha to monitor and besiege Parga. The castle is preserved in good condition.

The Island of Panagia: Just opposite the port of Parga is the green island of Panagia which you can go even swimming. On the island there is the church of Panagia and a small castle which was built by the French and dominates the highest point of the island.

Churches: Parga has a large number of churches. Probably the many raids and attacks he received, made the inhabitants turn to their religious feeling and the security it offers. Churches outside the city had loopholes for defensive purposes.

To the west of the city, at Cape Helati, is the Monastery of Vlacherna, a majestic building of the Byzantine period with a bell tower 15 m high, which according to tradition had nine bells that rang when they rang from a distance of 12 miles. It is a half-ruined small one-room church with a wall where the loopholes can be seen. The icon of Panagia Vlacherna is said to have come from Cappadocia. Today it is kept in the ecclesiastical museum of Parga.

The Ecclesiastical Museum: Located in the city center, right next to the church of Agios Apostolos. The visitor can find many interesting exhibits such as, two Gospels of the 17th century, two copies of epitaphs of a monk of Mount Athos (1600), old and newer icons including the Virgin of Vlacherna, the Virgin of Hodegetria and the Virgin Mary and the banner of Parga, about 300 years old, made of red silk, depicting the Virgin Mary and the divine infant with golden stars. On the flag one can distinguish the marks from the Turkish bullets.

The Mycenaean Tomb: It is a vaulted Mycenaean tomb found in the area of ​​”Kyperi” and dates from the 14th century.

Parga is also famous for its wonderful beaches. Most of the beaches are fully organized and have infrastructure for various water sports such as water skiing, windsurfing, paragliding, diving (especially around the castle of Parga and the island of Agios Nikolaos) etc.

The most famous and popular beaches of Parga are:

Valtos Beach: It is the largest beach of Parga with a length of about 3 km. It is located west of Parga just below the impressive rock that is built the castle of Parga. A beautiful beach with pebbles and sand that is plowed and offers the visitor water sports.

Piso Kryoneri Beach: It is a small beach also within the settlement of Parga that is surrounded by high rocks.

Lichnos Beach: One of the famous beaches of Parga that offers a green landscape and clear blue, crystal clear waters. It is sandy, but it also has pebble spots, has two small sea caves and is considered one of the most beautiful beaches of Parga. Another organized beach that offers the visitor water sports and is only 4 km from Parga.

Sarakiniko Beach: A beautiful beach located 12 km from Parga, after the village of Agia. There is a boat from the pier of Parga that can take you to Sarakiniko beach. A beautiful natural landscape that will reward the visitor.

Preveza: It is the capital of the homonymous prefecture and is located at its southern end. Preveza is very strongly reminiscent of an island as it is bathed by the sea on all three sides and has a marina. Narrow alleys and neoclassical buildings are some of its features. Also, very close to it is Aktio of Etoloakarnania, with which there is a connection through the underwater tunnel.

Paxos – Antipaxos: The most classic excursion from Parga is by boat to cross Paxos and Antipaxos. Paxos is a small paradise on earth. Thanks to the picturesqueness and authenticity of the landscape, the nobility, the remarkable tourist infrastructure and the cosmopolitan air, the island attracts a large number of visitors every year. The picturesque natural harbors, the impressive caves, the 64 churches, the thermal springs, the wonderful beaches with the crystal clear waters and the great cultural heritage of the island, enchant the visitor.

Antipaxos is only 3 nautical miles from the port of Paxos. It is an island overgrown with vines, where the images of natural beauty and the amazing beaches with white sand and the clear blue crystal waters captivate the visitor. Do not forget to try the excellent local wine. The beaches of Vrika and Voutoumi are very beautiful.

Sivota: It is a seaside village which is located at the southern end of the prefecture of Thesprotia, quite close to Parga on the road to Igoumenitsa (the route after the village Perdika is fantastic). They are built in an idyllic landscape with hills around a magnificent cove, green islands, wonderful beaches with crystal clear waters that fully justify the fact that the village is an attraction for thousands of tourists from Greece and abroad every year.

Parga is a hiker’s paradise, the Venetian olive grove, the surrounding hills and the shores are ideal for hikers. The Municipality of Parga has meant only one route from Parga to Valtos and from Valtos to the Old Fortress of Ali Pasha in Anthousa, but in the book we discovered really wonderful routes, you can buy it from the bookstores in Parga.
In addition to swimming, Parga offers several water sports, such as pedal boating, water skiing, jet skiing or sailing. Guests can explore the seabed, as diving facilities are available in the area.

The picturesque villages of Agia, Agia Kyriaki, Anthousa and Trikastro emerge in the enchanting mountain landscapes with the fertile slopes and the impressive plateaus. There are many paths that you can walk and get lost in the olive groves. Watermills, small churches, the castle, the river and the waterfall of Anthousa, are some of the many that you will discover in your passage.

In Parga and in the wider area you will be able to indulge and enjoy many sports activities, water and not, as there is infrastructure for diving, water skiing, fishing, wind-surfing, hiking, bird watching, rafting, mountain biking, paragliding , horseback riding, etc.

How to reach Parga

By air one can come from the three airports of the Area: