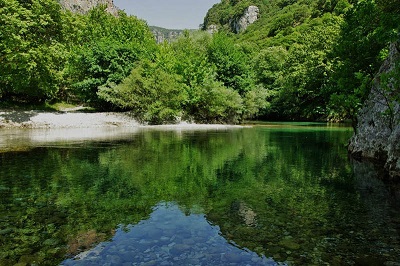 A grand feast of nature, from mountain to sea

In Epirus, the people seem to blend in with the land. You’ll meet a different Greece at this crossroads of civilisations and landscapes in the west of the country, between the Pindos Mountains and the Ionian Sea. Peaks, gorges, rare plants and animals, lakes, rivers and an indented coastline of sandy beaches complement the ancient ruins of Dodoni and dozens of medieval castles, monasteries, arched bridges and traditional stone-built villages.

The destinations are many and varied. From the picturesque Zagorohoria villages, Metsovo and Tzoumerka, to atmospheric Ioannina and the summer resorts of Parga and Syvota, Epirus will welcome you at any time of year and deliver on all its promises.

On the sandy shores of the endless Epirot coastline, from Preveza Parga, you’ll find beach bars to serve you drinks and summer spirit. Around Parga and Syvota, you’ll be itching to sail around the rugged bays and inlets to discover your private beach. And at Drepano, near Igoumenitsa, a glorious beach merges with a lagoon.

Mountains and gorges destined to be explored

High mountains and rushing rivers offer plenty of adrenaline-pumping excitement. You can kayak down the Aoos (top of the list in beauty and difficulty), raft the Voidomatis and the Arachthos and hike the Acheron River in the summer. You can base jump from Profitis Ilias, walk the Vikos Gorge, climb Pindos Mountains and rocks, or row in Ioannina’s lake.

If you’re inclined towards more sedate activities and want to relax in nature, there’s birdwatching in the Amvracian Gulf, one of Europe’s most important wetlands. Whatever you decide, try to fit in the following: the Zagorohoria, the Aoos Lake, Tzoumerka, the drive between Igoumenitsa and Metsovo on the Egnatia Highway and over the Katara Pass, the highest in Greece to remain open all winter.

Immerse yourself in the local culture

The history of Epirus is unbelievably rich. It’s all there to behold at the archaeological site of Dodoni, with its famous ancient theatre, and at Roman Nikopolis and the Oracle at Efyra. You’ll find it also at the castle of Ioannina, the Byzantine Museum of Its Kale, and the eight Byzantine and post-Byzantine monasteries on the island in the lake. Monasteries abound, with Agios Ioannis Rangovos and Agia Paraskevi being amongst the most noteworthy.

Throughout Epirus, you’ll admire the traditional workmanship in crafts of all kinds, from stonemasonry to the delicate art of the silversmiths. Discover wonderful unspoilt villages, which have been dubbed ‘poetry in stone’ because of their exceptional architecture, like those in the Zagoria district, Metsovo, Syrrako and Kalarrytes in the Tzoumerka mountain range. The ubiquitous arched stone bridges such as at Kipi, Plaka, Konitsa and, most famously of all, Arta further attest to the local stonemasons’ flair. Not to leave out the silversmiths: a tour around their ateliers in Ioannina will leave you gasping with admiration at their skills.

The culinary specialities of Epirus

The pastoral heritage of Epirus translates to a plethora of meat and dairy products. Epirot feta is rightly famous along with other dairy products, ranging from buttermilk to hard cheese. Also typical are various meat dishes, such as kleftiko and lamb with sorrel, while the pies made with homemade phyllo and stuffed with anything you can think of – zucchini, meat, chicken, cheese – are renowned throughout Greece.

Every place has its speciality: shrimp in the Amvracian Gulf; sweets like milk pie, kataifi, baklava and bougatsa in Ioannina; cheeses, pasta, wine and rice pie in Metsovo. And Zitsa is known for its sparkling wine and bottled water, sold under the names of Vikos and Tzoumerka.

The most popular sights and attractions in Epirus